Thespians at The Brighton Arts Club

The Thespians have arrived in full force at the club this week!
Sascha Cooper and her lively and creative troupe will be using the club on Wednesdays and Sundays to rehearse and for theatrical workshops. 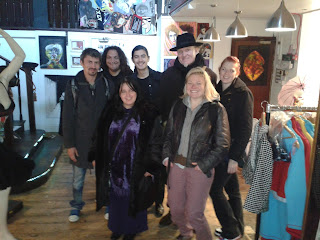 Crimson Horse Theatre aims to produce shows that either are new pieces of work, or a revamp of classic texts that have not been performed in a long time.
Founded by Sascha Cooper and Daniel Aherne in December 2009, their acting background not only brought them together as performers, but a similar goal to challenge themselves and push boundaries as creatives, hence Crimson Horse was born.
Shows to date include 'A Clockwork Orange', 'Women of the Thesmophoria' and their 2012 Brighton Fringe production 'Medusa'.
You can follow them on their Facebook page Crimson Horse Theatre https://www.facebook.com/pages/Crimson-Horse-Theatre/248048166583?ref=hl, on Twitter @crimsonhorse and their bloghttp://crimsonhorsetheatre.wordpress.com/ to keep up to date with all they do.
Posted by Pasha at Monday, November 05, 2012